We had a fun day at preschool today! Little S. is getting much more comfortable in the classroom and joined us for a storybook and for a song. The students are all really enjoying using the castanets and they are getting a much better sense of rhythm. 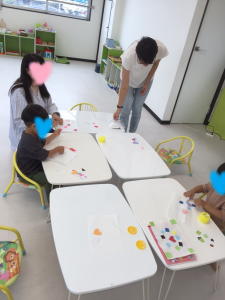 We enjoyed making a paper mosiac craft today. Everyone is getting better at using the glue; they don’t stick their entire hand into the glue jar anymore! They are also becoming more thorough when washing the glue off of their fingers. K. was very focused on the craft today and glued down many pieces of paper. 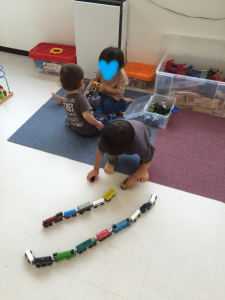 ays, the students are playing together a lot. I., H., and K. all played trains together. It’s been a great learning experience for them. K. and H. had a small disagreement over who could play with which trains, but they were quickly able to move on and help each other put together the train tracks. They are doing a great job using their words when they are upset with each other, both in Japanese and in English. 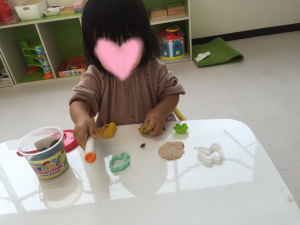 Little S. was confident enough today to try many new activities. Not only did she join us for part of Circle Time, she also joined us for Table Time! Later in the day she decided to play with play dough, which inspired H. and K. to play with play dough as well. It has been a good opportunity for the older students to interact with a younger student.

The weather looked gloomy today, but 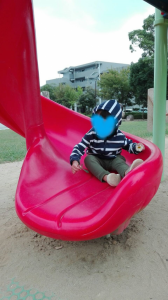 we were able to go to the park for a while today. H. picked a flower and gave it to K., who carried it with him for the rest of the day. They are becoming good friends! There were some people playing croquet at the park and I. and Big S. were very curious. They were going to run over, but understood when I told them it was the other people’s space and we could just watch. They really understand respecting others’ space now!

Next Tuesday will be our preschool Halloween party! We are excited!