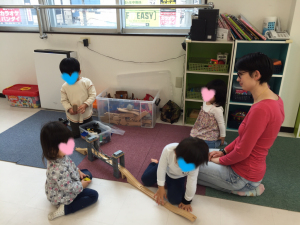 e had a lively day of preschool with five students. Today was Little K.’s first time coming on a Tuesday, but she wasn’t nervous meeting her new classmates. She quickly started playing trains together with the other students. Everyone has been practicing asking, “Can I play?” and they are needing less and less help with asking. 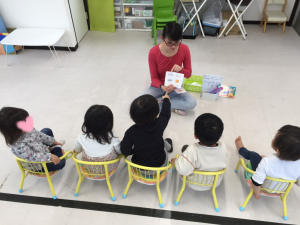 ce it was the first time some of the students met each other, the students all introduced themselves during Circle Time. They were able to say their name with a loud voice. Recently we’ve been practicing combining two sounds. The students were particularly interested in “N” and “O” today, as together they make the word, “No!” It was exciting to see that they understood that putting the letters together made a word. 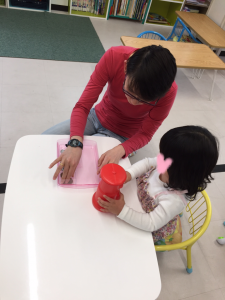 udents tried lots of activities for the first time today. Little S. decided to try the coin dropping activity. She was able to wait patiently while I showed her how to do the activity, and was able to do it on her own very quickly. Little K. tried hole punching. When she finished, she practiced saying, “Bag please.” She is getting 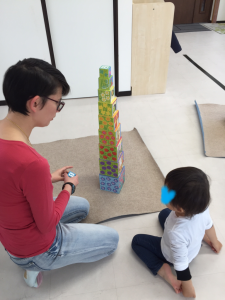 much more comfortable speaking to the teachers. H. and O. both tried making the box tower today. It can be a little tricky building the tower correctly, as there are different pictures on each side. H. worked very hard on it, and asked for help when he wasn’t sure which box to put next. O. listened to Miss Akiko very carefully as she showed him how to stack the boxes. 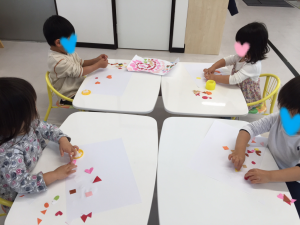 our craft today we made paper mosaics. The students could glue their paper any way they wanted. It was Little K.’s first time using glue at school, and she was very interested in it. O. was interested in comparing the glue at school to the glue he uses at home. H. enjoyed spreading the glue around his paper, adding all the paper after he put all the glue. K. was very selective about which pieces of paper he would use for his paper mosaic. Everyone’s art was very colorful!

It was their first 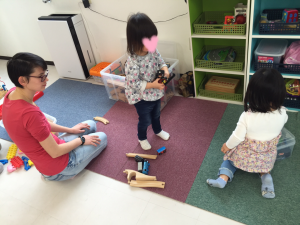 time meeting today, so Little S. was very curious about Little K. When Little K. took out the trains, Little S. watched very closely. With some help, Little S. was able to ask, “Can I play?” and the two of them played together for a few minutes. They were able to work together to clean up the trains; Little S. opened the train box for Little K. when she found some trains they had missed. Hopefully they can become good friends! 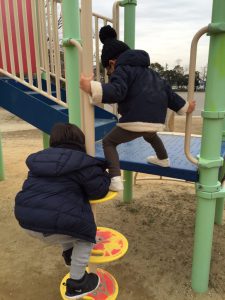 t was very cloudy today, but luckily it didn’t rain so we were able to play at the park. It’s been a while since we’ve been able to go outside on a Tuesday, so the boys were very excited to run around with each other. They ran all over the park, calling out each other’s names, asking each other to follow. We are glad that they were able to become such good friends before the school year ended.