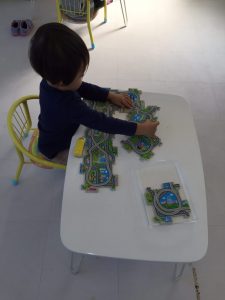 e had a full day of preschool today! The students tried many activities. H. has been enjoying our new train toy; he enjoys puzzles so he can focus on arranging the tracks. It’s a little bit tricky but the students all work hard at aligning the tracks so they can play with the train. They’ve also been enjoying using screws with our other new activity and can turn them much more easily now. 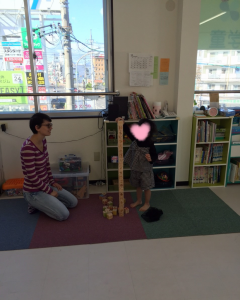 Big S. has been enjoying making block towers the past couple of days. She gets very excited when they get taller and taller until they eventually fall down. Big S. has become much more confident asking us to play with her using the phrase, “Play with me!” She’s grown up a lot.

The students are becoming more and more aware of each other’s needs and feelings. Today, H. gave me a tissue and said Big S.’s name because he noticed she had a runny nose. After some prompting, he was able to give the tissue directly to Big S. and she was able to wipe her nose. Later in the day, H. was playing more roughly than Big S. liked so she began to cry. He stopped immediately, and after she recovered H. offered her his hand. They were able to hold hands and continued to play together before lunch and at the park. It was a good chance for them to experience and understand each other’s feelings. 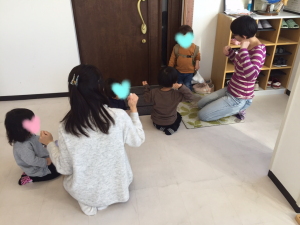 At the end of the day, the students all came to the door on their own to say goodbye to their other classmates. They requested we sing some songs, so we had fun singing and dancing together. K. has even memorized some of the silly songs that I made up! Little S. joined us and seemed happy listening to the songs. We’ve been practicing putting on our backpacks by ourselves recently. Today, I. was able to put on his backpack without asking for any help! He was very proud of himself. It feels great being able to do things independently, so we’ll keep practicing doing things on our own every day!