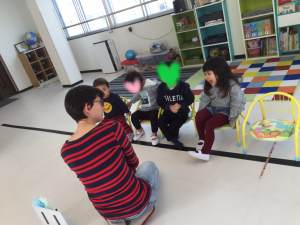 We had another great day at preschool today! Today the children had a great sense of humor. Before Circle Time, I asked the students what they had for breakfast. I gave some examples like ‘miso soup,’ ‘yakisoba,’ and ‘bread,’ but the children shook their heads to all the suggestions. Then T. said, “Mommy!” I asked him, “You ate mommy?!?!” He smiled and nodded his head and the other children started saying it too. “What did you eat for breakfast?” “Mommy!” “Daddy!” Even the younger two joined in. The older S. thought it was very funny too, but when I asked her if she ate mommy for breakfast she smiled and said, “No.” 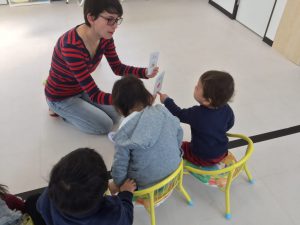 So far the children are adjusting well to the change to Circle Time. They seem to enjoy learning about the alphabet. Today I showed them two flashcards and asked them to touch the one that made the “Ah” sound. They mostly understood and many touched the A card while saying “Apple.” They also searched for the letter A in the storybook and today H. was very excited to point out the letter. 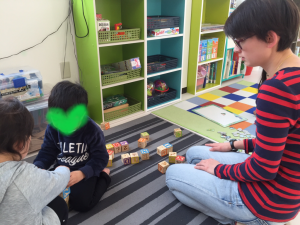 The students have been practicing being assertive in both English and Japanese. T. was making a block tower but S. kept touching it. He was able to tell her, “No!” in a strong voice. He was able to switch between several phrases in both English and Japanese to tell S. his feelings. All the students are getting much better at communicating with each other! 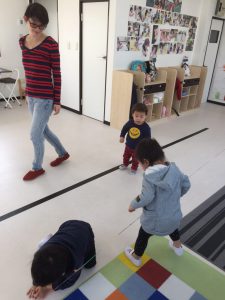 Today the students were very interested in the rubber band chain. Usually they have trouble sharing this toy and will complain if the other students touch it. However, today many of them were able to play with it at the same time! They were jumping and going under it and laughing with each other. It seems they trust each other more now.

Today was a short day but the kids were all very active and wanted to go to the park. Hopefully we have good weather tomorrow so we can fulfill their wish.

English Phrase of the Week

English Phrase of the Week: What’s this? vs. What’s that?