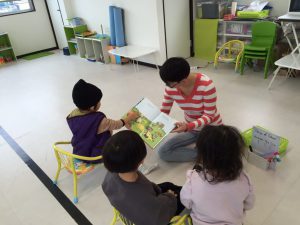 ere! Today was O.’s first time coming on Tuesday. He seemed a little nervous meeting his new classmates at first, but by the end of the day he was running around playing happily with them. The students are finally used to saying “December” when asked what month it is, but soon it will be January. The year has passed by so quickly! Big S., K., and H. were all very engaged in today’s book about farm animals. They pointed to all the animals and kept saying which ones were their favorites. Some of their favorites were the cats, dogs, and chickens.

This activity is a little difficult for the preschoolers because they have to push with enough force for the stapler to work. K. was able to experiment with different ways of holding the stapler to find the way that was easiest for him. The preschoolers have been working on their problem solving skills a lot recently. Instead of asking for help, they’ll try switching hands, or putting things in one by one, etc. They’ve gained a lot more confidence in their abilities. 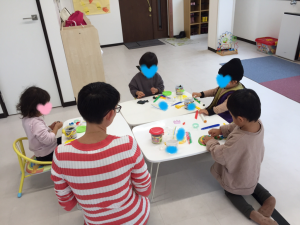 ith playdough today. It’s been a while since everyone has played with it, so some students forgot where their playdough was! Since we’ve been practicing reading everyone’s names, they were able to check the names on the playdough buckets to make sure they were getting their own. The student have gotten a little older, and now they are more interested in making things themselves rather than asking the teachers to make something for them. Big S. had fun using the cookie cutters, and H. practiced with the rolling pin. O. cut all of his playdough into little pieces and then squished them all together into a big, colorful pancake. K. rolled his playdough to make it longer. Playdough is such a versatile toy and the students were able to practice many different skills. 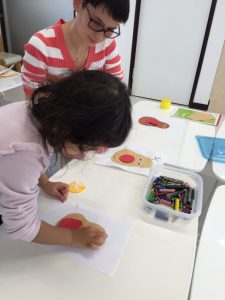 e made Rudolph the Red-nosed Reindeer for our craft today. The students were very focused gluing down his face and nose. They always love using the googly eyes, and have gotten very good at putting them on straight. They worked hard drawing Rudolph’s mouth and antlers using crayon.

By the end of the day, 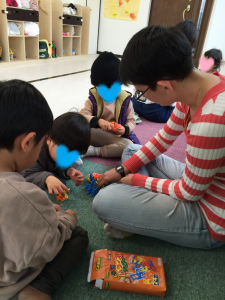 O. was very close with his classmates. They joined me for a short while playing the Balance Chair game, but they spent a long time chasing each other around. One of them would sit to take a break, and the others would copy. Then, one of them would get up and tell the others to start running again. They’ve gotten very good at communicating with each other! Unfortunately, it was rainy today so we couldn’t go to the park, but hopefully we’ll have better weather after the Winter Break.

This was our last Tuesday before the Winter Break. Have a Merry Christmas and a Happy New Year! We’ll see you in 2020!